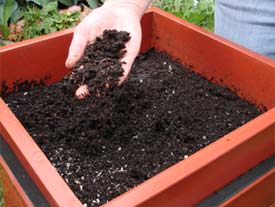 Remove the lid and turn it upside down next to your composter. Remove all trays except for the finished tray on the bottom and place them on the lid.

Remove the bottom (finished) tray and place it on top of the stack of trays on your lid. The finished tray should be directly on top of the current feeding tray.

Check the collection tray to see if it needs attention. Worms sometimes land in the collection tray. Remove any buildup of compost or worms and put them in the feeding tray. Drain your leachate if you have any and flush the spigot with water to ensure that it is not clogged. 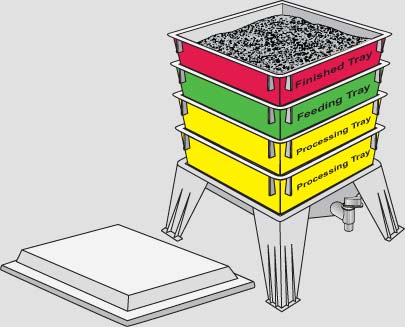 Replace the stack of trays on the base – the tray that was previously second from the bottom should now be on the bottom, and the finished tray should be on top, stacked on the feeding tray. 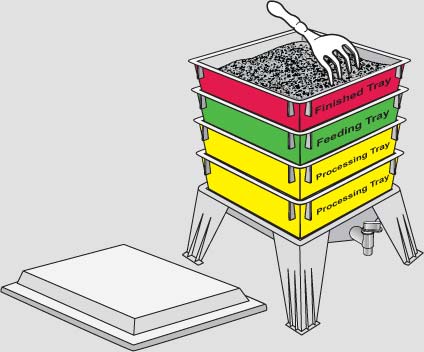 Leave the lid off, allowing light to enter the tray. Worms do not like light and will begin to migrate downward into the lower feeding tray. Use your hands, a hand rake, or spatula to gently loosen the compost, pulling it away from the sides of the tray to the center, forming a hill or a pyramid. This exposes more surface to the light and will encourage the worms to migrate down into the lower tray. It also starts to dry out the finished compost, which worms will want to avoid. Wait a few hours and then begin to scoop off the compost until you encounter worms. Repeat this process several times, always allowing time for the worms to move down into the lower tray. After you’ve done this a few times most of your worms should have migrated down and the tray should be emptied. The tray is now ready to reuse or set aside for later use.

Store your finished vermicompost in a non-airtight container or use it indoors or out to fertilize plants or to prepare soil for planting.

Shhhh ... The Worms are sleeping!

Worm Will Be Available Again in Mid-March

The worms are safe and warm in their winter beds. Sales will resume in mid-march.